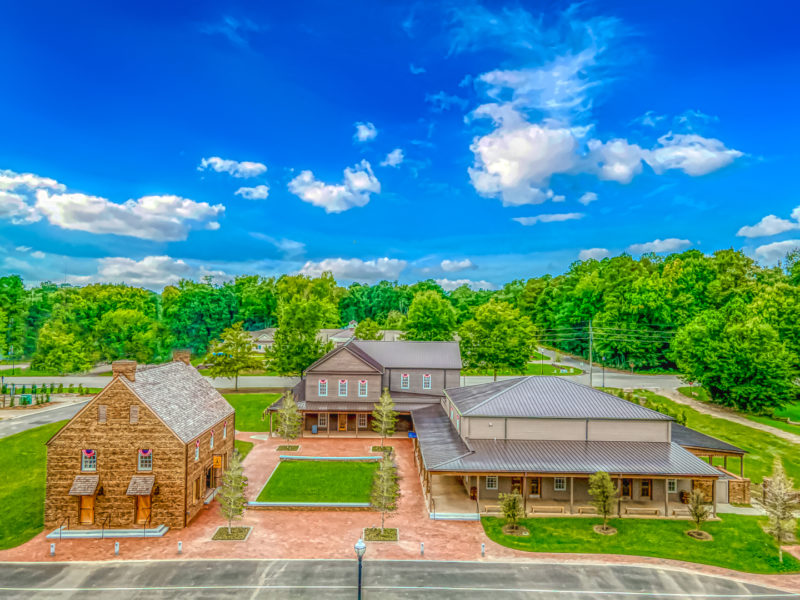 On January 17, 1781, general Daniel Morgan and his Continental troops were camped out in pastureland known as “cowpens” to take advantage of the forage for their horses and a hiding place in the dips between the hills.

British general Banastre Tarleton attacked the troops at dawn and a bloody battle ensued. The fighting lasted less than an hour; the Patriot forces declared victory while the British army suffered grave losses with 500 troops captured and more than 300 wounded or dead.

The National Park Service calls the Battle of Cowpens “the turning point of the war in the South” but Rickie Good, executive director of the Revolutionary War Visitor Center believes it’s just one of the bottles in the Southern Campaign of the American Revolution that are often glossed over in the history books.

“The Southern Campaign, which was very important, doesn’t get talked about a whole lot,” Good says. “You hear all about general Washington and Valley Forge and New Jersey, Philadelphia. New York…and Yorktown, which pretty much means that everything that happened in the South from 1780 to 1781 gets a few lines [in a book] or 10 or 15 minutes in a television show.”

The Revolutionary War Visitor Center in Camden aims to change the conversation about the American Revolution.

“We would never downplay the importance of what happened in other colonies,” Good adds. “We simply want to make sure everyone realizes that a lot happened here and it was important. It really was if the Southern colonies hadn’t continued to fight the outcome of the war would have been very different.”

While the idea to build a visitor center was not new—in fact, Good estimates it’s been talked about for up to 40 years—the idea only turned into a concrete plan about five years ago. It took a multi-stakeholder partnership that included American Battlefield Trust, City of Camden, Historic Camden Foundation, Central Carolina Technical College, Kershaw County and The South Carolina American Revolution 250th Commission, to make it happen.

The $6 million dollar attraction opened in 2021. It was built on 3.4 acres of land adjacent to Historic Camden, a Revolutionary War site and open air museum, and design to tell the stories of the Southern Campaign—and so much more.

Bringing an Idea to Life

Architects from Boykin and Munnerlyn Architects and project manager Ken Simmons of Kenneth B. Simmons Associates designed facility to reflect the period and fit in with Historic Camden. The planning process took several years and involved looking at countless historic photos, drawings and architectural renderings to develop a plan.

“We knew from the beginning…it wasn’t going to be something modern next to Colonial and Federal style buildings; it had to blend in with Historic Camden and the community,” Good says. “We don’t have a lot of brand-new buildings; we have a lot of historic buildings and we’re very proud of that. So, a lot of people came together, shared a lot of ideas…and coalesced around the vision. It was a very creative process.”

The design for the public house was based on photographs of an historic tavern in Camden that was demolished in the 1960s. The building, which reflects the Charleston single house style and represents a traditional late 1700s public house, is the cornerstone of the complex and features exhibits about the Southern Campaign and the role South Carolina played in the American Revolution.

Camden also had an historic market building in the 1830s. The inspiration for the Market Building at Big Pine Tree Creek came from the original architecture but, unlike the original building, which was open air, the new building has a brick framework with barn doors and shutters to give it an open air feel.

“Everyone thinks that it’s an original building because of the brick and because of the attention to details,” says Good. “We get a lot of compliments about the building.”

Liberty Hall might look old but the building is outfitted with state of the art technology thanks to Central Carolina Technical College. The audio visual equipment is used to host classes and presentations for Thursday Talks and Lunch and Learn events.

Recruiting a Platoon of Experts

It took just as long to create the exhibits at the Revolutionary War Visitor Center as it did to design the buildings. Exhibit consultants H.W. Exhibits in Mt. Pleasant consulted on the design, which includes a diorama of the Battle of Camden along with mannequins representing British and American troops including the Continental Army, North Carolina and Virginia militia who were at the battle of Camden.

Other exhibits highlight early colonization, the Catawba, Cherokee and Wateree tribes that inhabited the region during the American Revolution, enslaved Africans who were transported to the South against their will and the Europeans who settled the 13 colonies. The revolutionary war visitor center also explores the reasons for the war and the battles in the Southern Campaign.

“We try and make people understand that everyone wasn’t a Patriot [who rebelled against British control during the American Revolution],” says Good. “It was a difficult decision to make [and] everyone had their own reasons for deciding which group you wanted to support.”

The plan worked—to a point. British troops took Savannah, Charleston and Camden but battles waged across the states, which Good points to as one of the reasons “South Carolina was never really pacified.”

Ensuring that all of the info about the battles and the role Patriots and Loyalists played in the role was correct was top of mind in creating the exhibits. The team at the Revolutionary War Visitor Center worked with archeologists and battlefield experts, including Jim Legg at the South Carolina Department of Anthropology and Archeology and Charles Baxley, chair of the South Carolina 250th Commission, an organization focused on telling the story of the American Revolution on its 250th anniversary.

“When you’re talking about the battles…you’ve got to have an expert because the movements are confusing and just because one historian once said something happened doesn’t mean that the archeologists and historians who have been to the battlefields, done more work or research and haven’t discovered that what was said back then was wrong,” Good says. “We wanted the newest research so we worked with the people who had studied the battles in depth.”

The exhibits were designed to be educational but programming specialist Brittney Evans also wants to make sure visitors have fun. She created several programs for school groups to teach students about the Colonial era and the battles of the Southern Campaign.

The program highlighting the Battle of Camden introduces students to General Gates the issues he faced during battle. In one scenario, troops have been marching for three days; they are tired and hungry but their current location is not secure. Students are asked to decide whether Gates should instruct troops to set up camp and rest for the night or continue marching.

“It allows students to think about what was going on at the time and helps them understand why history happened the way it did,” Evans explains.

The programming has been a big hit with school groups.

The Revolutionary War Visitor Center also offers programming for adults. To date, it’s included presentations about the archeology at Star Fort Ninety-Six National Historic Site, the Scots-Irish Presbyterian Influence on the Revolutionary War, English country dancing and the experiences of Free People of Color during the 18th century.

Hands-on programs like basket weaving and Colonial games draw in new audiences and allow expert presenters to share their passions and educate and entertain visitors.

Fostering partnerships with other state and national historic sites is also top of mind for Good, especially as the Revolutionary War Visitor Center starts planning for programming for the 250th anniversary of the American Revolution in 2026.

The American Revolution may be the centerpiece of the new facility but it also functions as a visitor center. The site is open seven days a week to share information about things to see and do in Camden and Kershaw County.

“We wanted to do all we could put our best foot forward and make sure that all of the really fun places that you can go and see are listed [in the visitor center],” says Good. “But we also include information about the history of the county so that visitors would have a really good idea of what they could do and see when they were here.”

After visitors gather info about restaurants, shopping and, of course, historic sites, Good hopes the exhibits will peak their interest and lead them to explore and get a new perspective on the American Revolution.

“We want to educate the public but we want to do it in such a way that they enjoy it and think, ‘I want to go back,’” she says. “We also want visitors to go away knowing that South Carolina played a large role in the American Revolution and helped in winning that war.”