Marlboro Electric Cooperative Carousel Be Our Guest
Posted: October 1, 2020 at 7:00 am

In 1988, Wesley and Bonnie Park spent three weeks traveling from their home in Florida through North Carolina, South Carolina, and Virginia in search of a bed-and-breakfast. They spotted an ad in Country Living magazine for a grand historic home on the market in downtown Bennettsville.

“We’d never even heard of Bennettsville before,” Bonnie says.

The photos of the Beaux Arts-style home with its wide front porch, original architectural features, and gleaming woodwork captured the couple’s attention. They called the agent to set up a showing.

The home was built as a wedding present for Shadie Townsend, the daughter of Circuit Court Judge C.P. Townsend, who served three terms in the South Carolina House of Representatives. Seven of the original outbuildings—including a canning room, smokehouse, and carriage house— were still on the grounds.

The 1886 home, listed on the National Register of Historic Places, was as special as it appeared in the photos. The moment the Parks walked through the front door, they knew it was the one.

“We really liked the house and the small-town atmosphere of Bennettsville,” Bonnie says. “We put in an offer and then waited for four months to hear back. Folks were coming from all over because it was listed in Country Living. The owner wanted to exhaust all offers, but I just knew we were going to end up here.”

The Breeden Inn opened to guests in October 1988.

In the beginning, the main house had just two guestrooms: The Heart Room and Hunter’s Retreat. As a family with two small children, Bonnie knew the main house wouldn’t have enough space to work as their home and a profitable inn. When she spotted a for-sale sign in the yard of the bungalow next door, they jumped on the chance to buy it and expand Breeden Inn.

Dubbed the Carriage House, it was built in 1895 and required extensive renovation. When finished, it added four beautifully appointed guestrooms: Hewes of Blue, The Savannah Room, Cozy Carolina, and Things from the Attic. The Carriage House also includes a gathering room. The former sleeping porch is a favorite spot where guests can relax and play games, curl up with a mug of tea and a good book, or host casual meetings.

The Garden Cottage, also built in 1895, became part of the Breeden Inn in 1999. Bonnie and Wesley restored the historic home, located adjacent to the
Carriage House, adding four more rooms to the Breeden Inn: Love’s Bouquet, The Angelus, Ivy Garden, and Robin’s Nest.

“Our children would come home from school and help us do this and that when we were restoring the house,” Bonnie says. “We had contractors, too, but we were very hands-on in all of the restoration projects.”

Bonnie, who owned an antique shop in Florida, delighted in finding the right pieces for the homes. The rooms are outfitted with an eclectic collection of four-poster beds, tufted chairs, velvet settees, antique dressing tables, cozy quilts, and gilded mirrors.

Guests leave rave reviews about the decor, with comments such as, “Fascinating decor and artifacts in every space,” “Our accommodations were nothing short of sumptuous” and “(The Carriage House) reminded me of old craftsman homes.”

News of the upscale inn in the historic downtown district spread fast, as did demand for guestrooms.

In 2004, the Parks bought an additional property, the Retreat on Main. Although it was built in the late 1800s, the Parks were only the second family to own the Georgian- style home. It features three guestrooms: Serenity, Camelot, and the Manor.

A Home Away From Home

Guests travel from near and far to stay at Breeden Inn. Some are snowbirds who spend the night while traveling from New York to Florida for the winter—and then return in the spring—while others spend a few nights at the inn while visiting family for weddings, graduations, and other special events or sites in Marlboro County.

“God has really sent people to us from all over the world,” Bonnie says. “Some of our guests have been staying with us for years. We’ve watched their children grow up and their hair turn gray. Now, some of them even bring their grandchildren. You get close with folks who are repeat guests.”

Wesley and Bonnie also host guests who are relocating to Marlboro County and need a place to stay while searching for their new homes.

“When folks are interested in moving to our town or our county, we’re able to tell them some of the hidden things that you don’t see when you’re riding around in the car,” Bonnie says. “We share some of the history and the things that make this a great place to live.”

Regardless of the reason for their visits, guests appreciate the small-town atmosphere, well-appointed accommodations, and amenities that include a swimming pool, bike rentals, meeting and gathering spaces, and private grounds. Breakfast is also a hit. Bonnie sets the tables with linens and china.

“We set our tables with formal dishware, and it makes people feel spoiled,” she says. “Every morning, I paint this beautiful picture on a plate that is so appetizing and pretty. By serving breakfast, it enables us to answer any questions and get to know our guests.”

The formal sit-down breakfast—served between 7 and 8:30 a.m.—includes scones, muffins, coffee cake, and other homemade baked goods, eggs, cinnamon French toast, casseroles, and grits, all garnished with herbs and flowers from the gardens.

Some guests prefer to sleep late or dine in their rooms, so Bonnie also offers a continental breakfast that can be enjoyed in the guestrooms, and grab-and-go meals for those with early departures.

Although guestrooms at Breeden Inn are spread across four houses, all of the properties are connected by a series of gravel paths meandering through lush gardens.

Bonnie is a master gardener who lovingly tends to the gardens. She tore out kudzu and replaced it with colorful wisteria, Carolina jessamine, camellias, tropical palms, and other plantings that change with the seasons. The website bedandbreakfast.com voted Breeden Inn one of the Top 10 Garden Inns in 2013. 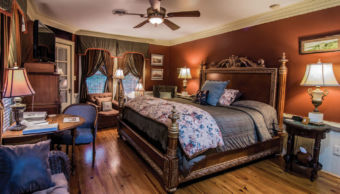 “Wesley grew up on a farm, and he had a landscape business when he was a teenager,” Bonnie says. “He would go from property to property in the subdivision and maintain these lawns and gardens. I grew up in a family where my granddaddy built a greenhouse in our backyard and both my grandmothers gardened.

“The first time I ever grew a plant on my own was in the third grade. We planted seeds and watched them grow. It just got inside me. It inspired me.”

With their love of gardening, it was no surprise the green thumbs jumped at the chance to buy another historic property in their neighborhood that came with a greenhouse and floral shop. Wesley and Bonnie had long been interested in making the dilapidated home between the Main House and Retreat on Main part of the inn. Guests often asked about the house.

I can’t remember checking the guests in to say, ‘No, we’re not restoring that property; we would like to own it to make it a nice place, but it’s not ours right now,’” Bonnie says.

The couple first contacted the owner about buying it in 2004. It took her almost a decade to respond. Wesley and Bonnie bought the house in 2013. Bonnie calls it a work in progress.

Rather than turning the bedrooms into guestrooms, the house serves as a multipurpose space. Wesley uses one of the rooms as an office for his accounting practice. Bonnie turned the old cookhouse into an art studio. She grows a selection of colorful, tropical plants ranging from palms and succulents to bromeliads in the original greenhouse. An adjoining floral shop stocks all manner of plants, art, and antiques. 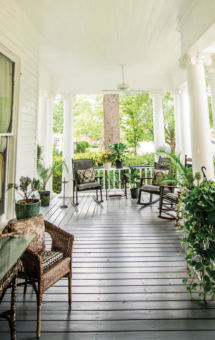 “I haven’t officially opened the antiques and garden shop to the public yet, but folks come and have fun kind of wandering through there,” Bonnie says. “Sometimes I’ll have a line at my desk of folks who have found things that they either have to have or enjoy or have been looking for or are meaningful.”

The still-to-be-named property also serves as a gathering spot for the local community. A sunken courtyard at the back of the house is decked out with an iron table in a peaceful setting among the gardens.

“I think Breeden Inn may be a focal point in Bennettsville where we’ve created this little village within the larger village of our downtown,” Bonnie says. “We love to inspire people. A really special thing that we are able to do here is encourage people to maybe go home and do something unique in one of their rooms or in the garden.”

Breeden Inn continues inspiring the Parks, too. Although Bonnie admits being an innkeeper is a demanding job, it’s also her dream come true.

“It’s long hours and it’s taxing, but it’s also very rewarding,” she says. “My husband and I are very creative people, and this property allows us to run rampant with our creativity. There is no limit to what we can do here. The seeds were planted long before we ended up here, and there is no place I’d rather be.”