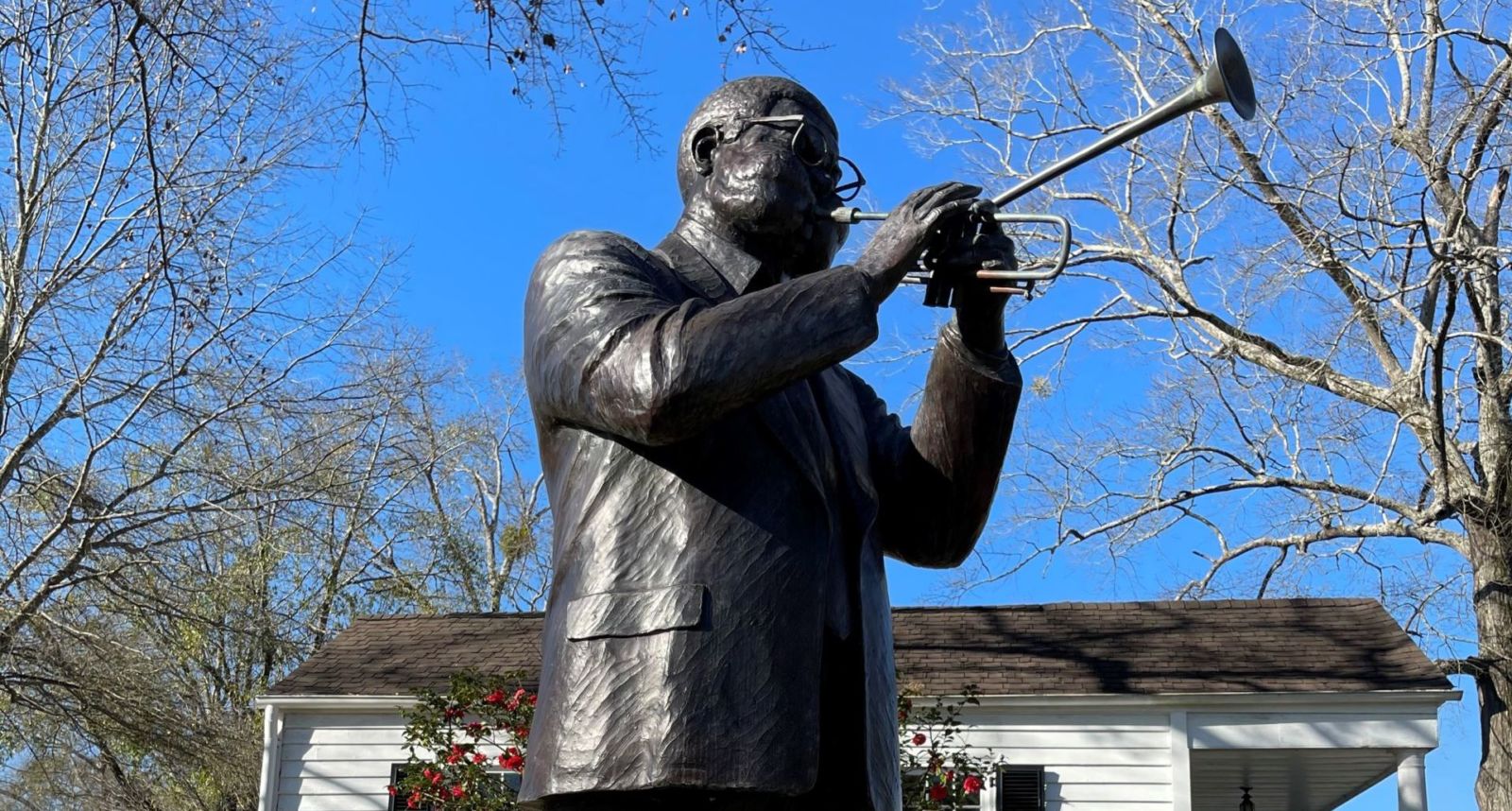 The youngest of nine children, John Birks Gillespie was born in Cheraw, South Carolina on October 21, 1917, but it wouldn’t be until 1935, when the seventeen-year-old began his career with the Frank Fairfax Orchestra, that he earned the well-known nickname ‘Dizzy,’ bestowed on him for his unpredictable horseplay and other antics.

Born to James and Lottie Gillespie, Dizzy’s dad was notoriously ill tempered. “”Every Sunday he’d whip us,” he once shared. His father, a bricklayer by profession, was also a pianist and the leader of a local band. As the son of a musician, Dizzy was exposed to a wide range of musical instruments. Gifted with extraordinary natural ability, he learned to play the piano at the age of four.

In 1945, his father James died of an asthma attack, and the family was thrust into financial hardship. Lottie went to work, but struggled to support the large family, so Dizzy got a job at a movie theater where part of the pay included watching the shows for free. He also found work picking cotton, doing road construction and retrieving coins from the bottom of a segregated swimming pool.

Despite all that, Gillespie’s interest in music continued. At school, his music teacher, Alice Wilson, gave him a trombone with the promise that if he learned to play it, he could perform in the school music show. While not known for his attention span for academics, the teacher was surprised to find that Dizzy would practice with the instrument for hours.

It was during one of these practice sessions when Gillespie heard the sound of a different instrument playing nearby. Next door, his neighbor was playing a trumpet, the sound and size of which immediately appealed to the burgeoning musician. Realizing the young man had talent, the neighbor loaned it to him, and Dizzy quickly taught himself to play.

While he was innately gifted, Dizzy’s early trumpet playing lacked any particular direction. However, all that changed when he heard a recording of David Roy Eldridge’s music. Born in 1911 and also known as “Little Jazz,” Eldridge’s sophisticated use of harmony and improvisation solos deeply impressed the young Gillespie, who began to emulate his style with the dream of also becoming a jazz musician.

During this time, many homes lacked electricity and the money necessary to buy a gramophone or radio, so music was often performed live, which gave rise to many traveling bands and orchestras. Some of these musicians heard about Dizzy and let him sit in with them when they came to town.

When he was in ninth grade, Gillespie’s music teacher informed him that the Laurinburg Technical Institute, an African American prep school 30 miles northeast across the North Carolina border, needed a trumpet player. Although a tuition-based private school, Dizzy was offered a full scholarship, plus room and board.

In 1935, during his third year at Laurinburg, Dizzy’s mother and siblings relocated to Philadelphia, and he soon followed. After just three days in the City of Brotherly Love, the seventeen-year-old landed a job playing professionally.

With a dream of making it big, he soon moved on to New York City, the place to be for a young musician at the time. His early jobs were with swing bands, and he was soon offered a spot in the well-known Teddy Hill Orchestra filling in for the regular trumpet player during a European tour. In 1937, shortly after his return, Gillespie met his future wife, Lorraine Willis, a chorus dancer with the famed Apollo Theater:

Back in New York, Gillespie hoped to play with one of the biggest names on the music scene, Cab Calloway. A product of the Harlem Renaissance, Calloway was exceedingly popular and even provided the music for the Betty Boop cartoon based on his famous song, “Minnie the Moocher,” a tune still known to many for its catchy chorus.

Legend has it that Mario Bauza, a member of Calloway’s band, became friends with Dizzy and arranged an impromptu audition of sorts. The orchestra dressed in zoot suits, and Bauza loaned Gillespie one of his and arranged to have him take his place one night. Rather than introduce himself, Gillespie showed up and sat down with the band. Calloway quickly noticed that someone he had never seen before was playing the trumpet solo, but he liked what he heard and kept him on.

Just a few months later, in 1940, Gillespie was summoned for the first peacetime draft. While the official records were somehow destroyed in the 1980s, Dizzy claimed that his clowning and antics so concerned the army psychiatrists that they put him under observation for a week before classifying him 4-F, “unfit for service.”

Soon thereafter, Lorraine and Dizzy married and remained together until his death in 1993. His career, however, quickly hit a snag. Although in later years Gillespie spoke well of Calloway, things came to a rough end in 1941.

After over a year performing together, Calloway had become exhausted with Gillespie’s endless clowning: making faces, pretending he recognized a friend in the audience and even throwing spitballs during romantic ballads. It wasn’t long before Calloway brought in another trumpet player, Jonah Jones, to be his head horn man.

A few months passed, and in September 1941, the band was playing in Hartford, Connecticut when a spitball came from the horn area and splattered onto a spotlight. Calloway immediately lashed out at Gillespie, who denied any involvement.

Indignant, Gillespie and Calloway had words, and the situation escalated quickly. Dizzy pulled a knife and went to stab the band leader, but one of the singers jumped between the two men, deflecting Gillespie’s arm. Nonetheless, Calloway was still injured, with a slice to his buttocks that required ten stitches and irrevocable damage to his fancy white suit.

The show must go on, and Calloway completed the performance before heading to the hospital. As he was leaving, he informed Gillespie that he no longer had a job. The October 15, 1941 issue of Downbeat Magazine covered the event with the snarky headline “Cab Calloway ‘Carved’ By Own Trumpet Man!!”

No charges were filed and decades later, trumpeter Jonah Jones confessed that he was actually the one who had shot the spitball.

Over the years, while playing independently or performing in nightclubs with Parker, Gillespie had been developing his own fast, spontaneous style that was outside the realm of jazz. Swing music had evolved an upbeat derivative peppered with nonsense lyrics – a style known as “scat” — and it was a short jump from there to the musical expression that became known as bebop.

While bebop is improvisational in nature, it is marked by rapid and complex melodies played in unison. To achieve this, the musicians would have to determine the progression well in advance. Case in point, there are numerous recordings of Gillespie and Parker rehearsing and working their collaborative songs out note by note.

Due to his ability to improvise with unprecedented ease, a critic once described Gillespie’s music as “the sound of surprise.” The Rough Guide to Jazz wrote “Gillespie’s magnificent sense of time and emotional intensity of his playing came from childhood roots. His par

ents were Methodists, but as a boy he used to sneak off every Sunday to the uninhibited Sanctified Church which he said had deep significance for him musically and taught him all about how music can transport people.”

By 1944, Gillespie, Parker and Vaughn had joined Billy Eckstine’s band, and later that year Esquire magazine named Dizzy the “Best New Star.” Soon thereafter, he decided to form a band of his own with Charlie Parker on sax, Max Roach on drums, Bud Powell on piano, and Ray Brown playing bass. Together they developed and defined the bebop sound.

The Dizzy Gillespie Orchestra began touring the country, but it turned out the average music fan didn’t care for bebop and the audiences in the south liked it even less. To make matters worse, Parker was now addicted to heroin, which affected both his playing and his reliability. Nonetheless, the band accepted a three-week engagement at Billy Berg’s Los Angeles nightclub.

While a draw at first, the west coast audiences soon dropped off as well, most uncertain how to take the unusual new style of music. Unable to access his usual drug connections, Parker began disappearing for days at a time in search of heroin. When the time came to return to New York City, he was nowhere to be found, and the band later learned that he had been committed to the Camarillo State Hospital where he remained for six months.

In a telephone interview with the Hartford Courant in April 2005, Gillespie’s biographer Donald L. Maggin said “Dizzy indulged in cocaine now and then. The difference is that he never got addicted. His wife, Lorraine, was extremely strict and really laid down the law to him on that stuff. He constantly said that Lorraine was his shield, his Rock of Gibraltar, who saved him from getting hooked on and dying from heroin, a fate common to many of his jazz contemporaries.”

Along with his unique musical style, Gillespie became known for some other trademark items. In 1953, during a Manhattan birthday party for Lorraine, Gillespie’s trumpet bell was damaged when two dancers fell on it. However, he soon found that the upward 45-degree angle of the bell allowed him to hear the notes more quickly, as well as enabling him to point the sound at the audience even if he was looking down at music. He was so fond of the unexpected benefits that he later ordered one to be constructed in a similar bent fashion, and this became one of his trademarks.

His ever-present beret, horn-rimmed glasses and goatee also became hallmarks, and young female fans would attend his concerts sporting all three. Another unique characteristic of Gillespie’s style was that he puffed out his cheeks while playing, atypical for the instrument. While a number of theories exist, his own explanation was that he had taught himself to play and didn’t realize you weren’t supposed to do that.

Charlie Parker died in 1955 at age 34 and in relative obscurity, but Gillespie remained on the scene and in the public eye for decades. His infamous hijinks continued as well. In 1964, he put himself forward as an independent write-in candidate in the United States presidential campaign. His running mate was Phyllis Diller and one of his campaign promises included renaming the White House, the Blues House. While he was not elected to office, during the course of his career Gillespie was invited to perform at the White House by eight Presidents and was a National Medal of Arts recipient in 1989.

Gillespie continued to perform up until his death in 1993 and at some point during all of his performances, he’d always tell the audience, “I’d like to introduce the band.” Invariably, he’d then present the band members to each other as they cheerfully shook hands.