In the 1920s, when summer temperatures left locals sweltering, Parrish Mill was the hottest place to be.

The popular swimming hole on a 90-degree curve upstream on the Little Pee Dee River was a favorite gathering spot. Daredevils climbed onto the diving platform built between two cypress trees and swung out over the river on the rope swing, letting go at just the right moment to splash into the cool water below—a ritual that repeated itself all summer. Colorful lawn chairs lined the riverbank, and families caught up on local goings-on while shelling peas or butterbeans.

“The water was almost black and so cold it would take your breath,” recalls Sam P. “Bo” McInnis Jr., the current owner of Parrish Mill and chairman of the board for Marlboro Electric Corp. “It was the first place people came to show off a new car or celebrate their birthdays because they knew everyone would be there. It was good, wholesome fun.” 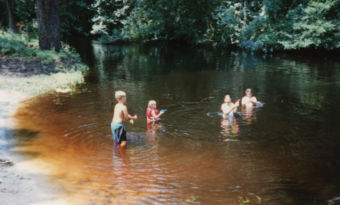 Parrish Mill didn’t start out as a swimming hole. As its name suggests, it was the site of a former mill complex.

A local man named Bishop Parrish settled on the site in the 1890s and started building a business. The land, which sat on the dividing line between Dillon and Marion counties, provided access to streams and millponds on and off Little Pee Dee River.

Bishop also used timber harvested from the property to build a home on the site in 1898.

The business, known as Parrish Mill, thrived until Bishop was convicted of a federal mail violation in 1918. His crime: writing and mailing a letter to an unmarried couple who had secret trysts at the millpond. In the letter, it was reported that he called them sinners and warned them against coming back to his land.

The actions were deemed threatening, and Bishop was sentenced to just over a year in a federal penitentiary. Operations at the mill complex ground to a halt while he was incarcerated and he lost the property.

In 1923, the McInnis brothers—Daniel B., Miles, Jack, and Edwin Lee—bought the land and transitioned it into farmland. The youngest brother, Edwin Lee, moved into the original Parrish home. The house had fallen into disrepair after being abandoned and needed significant work to make it habitable. It was rumored that a squatter hiding from revenuers was using one of the upstairs bedrooms to make corn liquor in a copper still.

Edwin Lee and his wife, Winnie, raised their six children on the old Parrish homestead. Swimming in the Parrish Mill pond was a favorite pastime. As the children grew up and started having families of their own, the swimming hole was more popular than ever.

The pond was not just a favorite spot for the McInnis family. Trespassers snuck in to take a dip—sometimes swimming naked—and often drank to excess and started fights. To deter dangerous behavior and ensure the swimming hole remained safe, the McInnis family established a members-only club.

During annual meetings, Bo recalls, it was almost impossible to find a parking spot at Parrish Mill. The entire membership turned out to eat hot dogs, watermelon and ice cream, splash in the water and spend time together—in addition to paying their annual membership dues and taking care of important club business.

“The whole experience of the platform and the rope off the tree and dropping off into the water was magical,” Bo says. “Even the kids who didn’t want to go swimming almost had to be pried off (the rope) with a crowbar when it was time to go home because they didn’t want to leave.”

As part of the transition to a membership organization with a goal of providing a safe space for swimming, bathing, fishing, boating, hunting and other allied recreational and social uses, the McInnis family fenced in a 4-acre area, built a covered picnic area and tennis courts, and installed electric lights so members could take a dip after dark.

The club also established rules and regulations that prioritized the joint goals of safety and community gathering. Alcohol, drugs and firearms were prohibited; use of the rope swing was limited to one member at a time; and no one was allowed to use the rope when the water level was down. Violating the rules could result in fines, expulsion from the premises or loss of membership. The board of directors reviewed and approved all membership applications.

A one-time $5 initiation fee plus a $5 annual membership fee—later raised to $15—helped cover the cost of maintaining the facilities. In the 1960s and 1970s, at the height of the club’s popularity, Bo estimates at least 100 local families had memberships to Parrish Mill Club and frequented the swimming hole.

“We had members from all walks of life—from a member of the Apollo space program and Fortune 500 CEOs to everyone in between,” he says. “Everybody enjoyed it the same.”

Community members have fond memories of frolicking in the swimming hole. Bo posted on Facebook asking friends to share their recollections. The post was flooded with stories of summers spent at Parrish Mill.

He recalls that a bar of Ivory soap was always floating in the water so members could wash up before bed. It was one of his favorite rituals.

“We worked on farms growing tobacco and it was hot—and the home I grew up in didn’t have air conditioning,” he says. “We’d go every night and take a swim and we could sleep through the night.”

Peggy Newton Freeman shared a similar memory, writing, “Of course we took baths there many nights after a day of fun when we were little. (It was) one of the best places to go as a kid.”

Natalie McDonald recalled learning to swim at Parrish Mill Club and watching her dad “cut flips” off the rope, adding that her family often had picnics on the sandy banks and bathed in the cool waters, often after a day of scouting cotton.

“So thankful it was part of my childhood,” she added.

Swimming at Parrish Mill Club was a summer ritual for four generations of Randy McCall’s family. His Facebook post said, “My grandfather Yancy McCall swam there; my father swam there; I swam there and taught…my two girls to swim there. More memories than I could count.”

Even those who had never been to Parrish Mill heard about the swimming hole and expressed regret that they never got to experience it.

Bo is not surprised at the positive memories local families have of their time at Parrish Mill. He believes the swimming hole helped bring the community together.

“In a rural area like this, we didn’t have recreation centers like some cities and towns, and the community didn’t have a place like this other than church—and this even transcended some of the churches,” he says. “There were churches in the area, but this was the one place where everybody saw everybody.”

Bo and his wife, Patti, bought the family property in 1999. The couple renovated the original homeplace, which the Dillon Herald newspaper called one of the prettiest homes in the county in a 2004 article.

The next generations of his family continue to swim in the Little Pee Dee River.

During the past two decades, the populations of Dillon, Marlboro, and Marion counties have shrunk substantially. Membership at Parrish Mill Club has declined, too.

“Tobacco started disappearing, and farming is so mechanized with cotton pickers and such that there were fewer farm workers coming to the area,” Bo says. “People packed up and moved on. The families and kids that used to come out are gone.”

The McInnis family continued struggling with the same issues that plagued the swimming hole in the 1920s and 1930s before it was incorporated as a private club, including repeated break-ins, vandalism, alcohol, drugs, and fighting. The troubles led to multiple community complaints, and police were often dispatched to run off trespassers.

Bo says the club went from a community gathering place to a neighborhood nuisance.

On March 12, 2007, after more than 50 years as a well-loved community swimming hole, club officers dissolved the corporation and closed Parrish Mill Club.

But that doesn’t mean the next generation will miss out on the fun. Bo rebuilt the picnic shelter and diving platform to look just as they did in 1955, and the swimming hole is still used by the McInnis family and their friends during the summer. 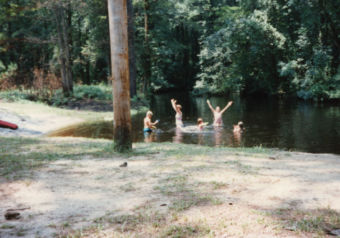 Thanks to continued interest from community groups—including the Boy Scouts and local churches that use the property for picnics, swimming parties, and even occasional baptisms—he estimates at least 750 people swing from the rope and drop into the water or watch from the lawn chairs lined up on the riverbanks between May and October.

It will never open as a private club again, but Bo wants to ensure Parrish Mill remains a treasured part of the community—even if on a limited basis.

“There were so many people who had the opportunity to swim (at Parrish Mill) and love sharing their stories,” Bo says. “It was such a unique gathering spot that had such a special place in our community.”

“If you had an opportunity to use the facilities in the early years and went back today, it would be almost identical—like going back in time.