Marlboro Electric Cooperative Carousel From Battle to Cattle
Posted: January 1, 2021 at 7:00 am

Not long after Jeff and Janice Wyatt inherited family farmland in Blenhe the couple set to work transforming the land into their dream farm. They cleared trees, built a farmhouse, and installed pasture fencing and water sources—all with a goal to raise livestock.

Starting Rogers Creek Farm was a massive undertaking with a steep learning curve. No matter what obstacles the couple experienced along the way, Janice says she kept faith the farming venture would work out when the timing was right.

“Our farm sign has a scripture reference, ‘In his heart, a man has his plans, but the Lord determines his steps,’ ” she says. “That has been true for this farm since the very first time we talked about it and is still true today. God is always guiding and directing us.”

A shared belief that God had a plan has guided the couple their entire relationship.

Jeff and Janice met during college when both were enrolled at the University of South Carolina and worked part-time at Belk in downtown Columbia. After finishing their undergraduate degrees, Jeff enrolled in graduate school to pursue a master’s degree in government relations. He also joined Army ROTC. Upon graduation, he was commissioned as a second lieutenant in the U.S. Army.

Jeff spent 27 years in the military, rising through the ranks to colonel. Along the way, the Army sent the couple and their four children to posts in Europe, Africa, and the Middle East, where the family hosted congressional delegations and visited with heads of state—from the late Sen. John McCain to former Secretary of State Hillary Clinton.

Janice, who became accustomed to adapting to change and thriving in unfamiliar situations, dreamed of returning to her roots and establishing a permanent home back in Blenheim.

When retirement loomed, the couple turned their attention to planning for life after the military.

“We always had a love of cattle, and back when we were still dating, we talked to my dad about raising cattle, and he thought it was a great idea,” Janice says. “That little spark created an ember in our hearts, and a dream was born. When we dreamed about the future, wherever we might be—sitting on a terrace in Germany or on the Mediterranean Sea in Tunisia or the Arabian Gulf in Abu Dhabi—we’d come back to that dream of raising cattle.”

While stationed in Morocco during their last overseas assignment, Jeff turned down several assignments that would have ensured his progression in the military and an eventual promotion to the rank of brigadier general. He accepted a post at Shaw Air Force Base in Sumter instead.

“It was all for the fact that we had this dream and wanted to get back to South Carolina to start working toward the dream of raising livestock,” Janice says.

The couple returned to South Carolina in 2013. A few months later, amid building Rogers Creek Farm, Jeff was called up for an 18-month deployment to Iraq.

“It was when ISIS was at its peak,” Janice says. “It was very nerve-wracking, stressful, dangerous time for him to be in Iraq. We communicated as best we could through email and phone calls, but it was hard. I was here, alone, and it put the farm on hold.”

While Jeff served in Iraq, Janice continued making plans for the farm. She grew up in Blenheim watching her father juggling farming with a career as a rural mail carrier. She planned to raise cattle on the same land where he grew corn, tobacco, cotton, and soybeans.

“We had no clue what raising cattle entailed or what breed we’d raise, but it was something we were determined to do,” Janice says.

In 2015, after Jeff returned from his final overseas tour, the couple bought seven head of cattle: four heifers, two cows, and a bull. Although they knew Angus was a more popular breed of beef cattle, Jeff and Janice decided to raise Red Poll cattle.

Red Poll is a dual-purpose breed that originated in England in the 1800s. The dark red, naturally polled breed is known for being highly fertile and producing fast-growing calves praised for the quality of their meat. The breed is also endangered, according to the Livestock Conservancy, and Jeff and Janice wanted to do their part to help restore its numbers while producing delicious beef for their community.

“If you compare an Angus steak to a Red Poll steak, you’ll be able to tell the difference,” Janice says. “The beef from Red Poll cattle has a superior flavor.”

Since bringing their first herd home in 2015, the number of red poll cattle on the farm has increased to 40. In addition to selling the beef, the couple breeds their Reserve Grand Champion bull with their best heifers. The calves are sold to other farms so farmers can improve their bloodlines, further restoring the breed.

Rogers Creek Farm is also home to a flock of laying hens. The eggs from the pastured poultry are in high demand.

Jeff and Janice also tried raising pigs. The pork from the Red Wattle hogs—another threatened breed—was phenomenal, but the couple decided the animals were not the right fit for Rogers Creek Farm. Rather than thinking of pork production as a failure, Janice chalks it up to a valuable learning experience. 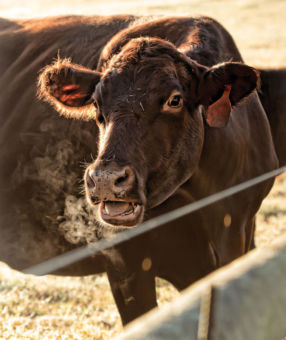 Throughout their farming journey, Janice has embraced the opportunity to learn new things and experiment on the farm.

She signed up for the South Carolina New and Beginning Farmer Program and courses through Clemson Extension Master Cattleman Program, the United States Department of Agriculture Farm Service Agency, and Annie’s Project—a program designed to empower women in agriculture.

Janice also made connections with the local livestock and forages Extension agents at Clemson University, who provided invaluable information and support.

“The farm would not be where it is now if it wasn’t for Clemson Extension,” Janice says. “The livestock and forage agents that I reach out to on a regular basis have been godsends. Because my husband was always busy with his Army job, it fell to me to learn as much as I could.”

A continual willingness to learn and adapt proved essential when the COVID- 19 pandemic hit in March.

Like other local farms, Rogers Creek experienced unprecedented demand for local meat when supermarkets started running low. The farm already had a loyal following for its pasture-raised, grass-fed, grass-finished beef. It received even more phone calls and Facebook messages with requests to buy ground beef, sirloin, cube steak, and other cuts of meat.

Although Rogers Creek Farm had more than enough cattle to satisfy the hunger for local beef, the meatpacking plant lacked the capacity to process additional cattle. The small plant, which is a three-hour round trip from the farm, could only accept one cow from Rogers Creek Farm at a time.

Janice would like to see a local processing plant. She even reached out to Hugh Weathers, South Carolina commissioner of agriculture, to discuss the issue. In the meantime, she is focused on being a good steward of the land, tending to the cattle and striving to meet the demand for fresh, local meat.

Information about available cuts of beef is posted on the Rogers Creek Farm Facebook page and sent out to an extensive email list. The response is immediate.

“It sells out in less than a week after we’ve restocked,” Janice says.

A New Venture Is Blossoming

In 2020, Janice created a new venture, Red Door Flowers. She started growing cut flowers after seeing a post on Facebook from someone looking to buy local blooms.

“I love to grow flowers, and I follow a ton of people on Instagram who seem to have it figured out and are a wealth of information for questions I want to ask,” she says. “I thought on a whim, ‘I’m going to do this.’”

Janice grew tulips, daffodils, larkspur, yarrow, snapdragons, zinnia, sunflowers, celosia, amaranth, and dahlias in the first season. She plans to add more perennials and annuals as the farm grows. The cut flowers are so popular that seasonal weekly, biweekly and monthly subscriptions sold out in less than 12 hours.

“I started out small as a trial to see what worked, what grows well, and how well I could handle it,” she says. “It’s been phenomenal. I’m hooked. I’m already planning to do things bigger and better for next year.”

Janice loves raising livestock but says growing cut flowers is especially fulfilling. “I tend to the animals in the morning, and then they are good on their own,” she says. “I’m in the flowers daily and I have butterflies flitting around all over the place and alighting on me while I’m working. The icing on the cake for me is that I get to hand over a beautiful bouquet and see the smiles on the faces of my customers.”

For Janice—who never imagined starting a farm or making Blenheim her permanent home—the seed of a dream planted while she was living overseas has blossomed into a more fulfilling life than she ever imagined.

“On our final overseas assignment, we were attached to the American Embassy in Morocco,” Janice says.

“We had to rub elbows with a lot of foreign dignitaries and attend a lot of important formal functions. “If I had to choose between ballgowns and muck boots, I believe I’d choose the muck boots because l feel like I’m giving back to my community.”