7 haunted sites that are sure to provide a scare

During the Civil War, Philadelphia resident Florena Budwin dressed up as a man and joined the Union Army to fight alongside her husband.

Confederate soldiers captured Budwin and took her to the Florence Stockade, an infamous prisoner of war camp near Florence. She was later buried at Florence National Cemetery but, according to Tally Johnson, Budwin is not resting in peace.

“People have reported seeing a blue ball of light over her [grave] marker and seeing a figure in a dark dress in the cemetery,” says Johnson, author of four books about South Carolina ghost lore, including Ghosts of the Pee Dee and Civil War Ghosts of South Carolina. “Real Ghosts are much scarier than fake ones, especially if you don’t expect to see one.

The legend of Florena Budwin is just one of the ghost stories Johnson uncovered while researching his books and the Florence National Cemetery is one of his favorite spots to see ghosts in the Pee Dee region. 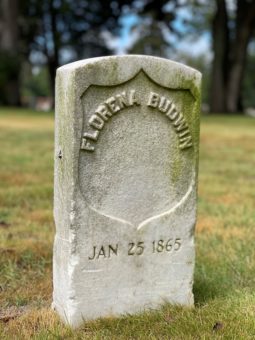 There are believed to be many ghosts haunting South Carolina in places ranging from private homes and cemeteries to jails and college dorms—and the interest in checking out these spooky places spikes around Halloween.

“[Ghost stories] are a way to keep the history of the area alive,” Johnson says. “It’s almost like the National Enquirer: stories that may or may not be true keep the memory of events and people alive after they should have been forgotten—and the chance of a scare is also great, of course.”

There is some science behind why we like to be scared: fear causes the body sympathetic nervous system to release certain home hormones, including adrenaline, that caused a heightened state of mental arousal and a sense of euphoria. After the fear subsides because the ghost stories and or the chains are willing actor who jumped out of the cornfield disappears, we feel a strong sense of relief.

Don’t believe in ghosts? Local haunted attractions like to Scream Acres and Kreepy Hollow provide all the fright with none of the folklore, proving there are plenty of ways to experience a “fright night” in South Carolina.

Check out these seven places to experience ghosts, goblins, witches and murderous clowns just in time for Halloween.

Colonel Kolb’s Tomb: In 1781, British loyalists captured Revolutionary War Colonel Abel Kolb, shooting him in front of his wife and children while his house burned to the ground. The gravesite has mostly been abandoned—except for the ghost of Colonel Kolb who reportedly still haunts the grounds.

“He was a true patriot and true hero for this area, but he died in a very traumatic way,” Brian Gandy, director of the Darlington County Historical Commission, told SC Now. “If there is any indication of ghostly spirits in the area, Colonel Kolb would be a likely candidate.”

The tomb was vandalized, prompting the Marlboro County Historical Museum to move the obelisk that marked Colonel Kolb’s final resting place to the museum grounds in Bennettsville.

Lowther’s Hill Cemetery: Locals have been telling ghost stories about Montrose, a spirit that haunts the cemetery, since the 1950s. According to legend, the ghost of Montrose scared visitors so badly, it caused them to flee the graveyard and run all the way back to Darlington.

The cemetery was established in 1789 on the grounds of the Mount Pleasant Baptist Church. Ghost hunters have reported sightings of ghosts and shapeless shadows and the sounds of children crying in the night.

Gandy told SC Now that there are no reports of murder or other crimes that would cause spirits to linger, he added, “I can tell you one thing: If I were interred at Lowther’s Hill and my spirit still roamed the cemetery, I’d run off every person that came up there.”

Due to vandalism, many of the gravestones have been moved to the Darlington County Historical Commission for safekeeping.

Otherworldly voices saying, “Don’t leave me,” were recorded in the North Guest House. You’ll have to reserve a room to see if you’ll hear voices from the beyond, too.

Church of the Holy Cross: The historic Anglican church in Stateburg dates back to 1850. Local architect Edward C. Jones designed the church, which was built on land donated by Revolutionary War general Thomas Sumter—but it’s not just the Gothic revival architecture and stunning stained glass that attract attention.

Ghost hunters have reported a rather unusual paranormal experiences in the cemetery. The ghost of a Confederate soldier has been reported walking him among the tombstones while another ghost, a woman dressed in a wedding gown, perches on the tree branches above.

“My favorite story from the Pee Dee is the legend of the haunting at the Church of the Holy Cross,” Johnson says. “The soldier just walks past and the bride vanishes when she is noticed. [It’s a great ghost story] because of the history connected with the church…plus, a ghostly bride sitting in a tree? That’s creepy and funny.”

Church of the Holy Cross

Kreepy Hollow: The adventure starts after the sun goes down: Visitors climb aboard an old school bus, take their seats and prepare for a terrifying ride. Once the heart-pumping ride is over, it’s on to a haunted house, graveyard tour and hayride, each with scary surprises around every corner.

“People like thrills [and] will pay for attractions that get their blood pumping,” he adds.

The haunted attraction in Bishopville, has been scaring visitors for 13 years. Visiting haunted houses across the United States has provided a lot of inspiration and ideas and Sims notes that new scares, characters and attractions are added each season. The latest additions include new scares to the Salem Witch Trials scene that’s part of the haunted hayride.

“The hayride is our last attraction and offers seven deadly spots that will keep customers on the edge of their seats,” Sims says.

The trail, part of a two-mile haunted hayride, leads to a cabin hidden in the woods where a voodoo doctor casts spells on his patients. It’s all part of a popular haunted attraction that Bobby and Pam Hasibar have been operating since 2000.

The couple also transformed an 1890s home into a house of horrors with screams and surprises in every room—and not all of the haunted happenings are manmade.

“We have people who come to the front office to buy tickets and tell us they saw the Indian on the horse at the end of the road; there is no Indian on a horse out there,” says Pam.

Ghost hunters have visited the haunted attraction and recorded the sounds of children laughing and an inexplicable light in the woods. Even Bobby admits that he doesn’t like to spend too much time in the haunted house.

“You definitely don’t want to be in there by yourself at night,” he says. “

Dreadwood Farms: There are monsters living in the 500-acre woods and their goal is to provide a “hair raising, blood chilling, truly frightening experience” for all who dare to venture into the woods.

Ride a bus into the village where the undead are waiting. On a walk through the woods, meet the residents, learn about their ways of life, which include torture, madness and mayhem.

Hobkirk’s Hill: During the Revolutionary War, the Second Battle of Camden was fought on Hobkirk’s Hill on April 25, 1781. A cannon decapitated a soldier on horseback during the bloody battle; his horse continued into the Black River swamp.

No one knows whether it was a Confederate or Union soldier but his ghost continues haunting the battlefield. The headless horseman is often seen during a full moon; he emerges from the swamp and rides across the battlefield.

Johnson believes that battles that date back to the Revolution continue to draw attention—and ghosts—because the “conflict was neighbor versus neighbor so those emotions and the violence leave a mark.”