While the two oil companies are unrelated, they share equally historied backstories. 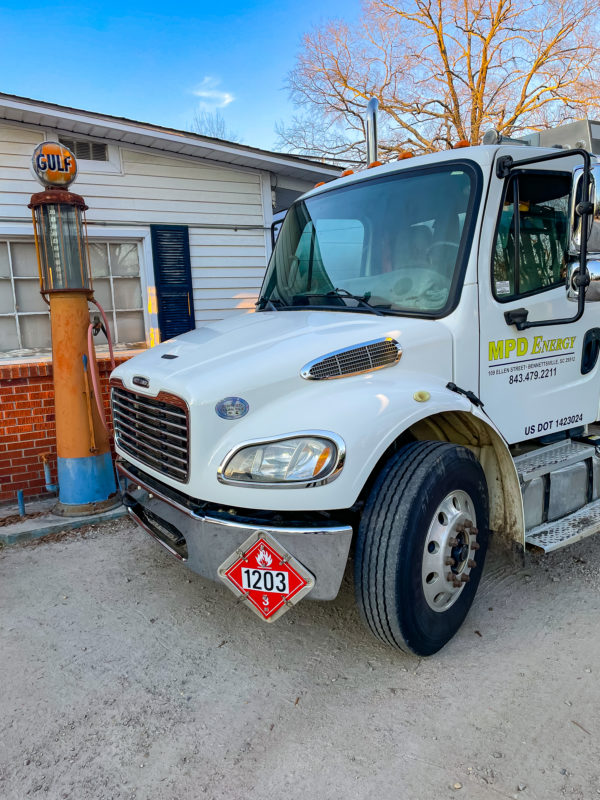 Founded in the 1950s by Preston Moore, the company’s current location on Ellen Street began as a Gulf Oil distributorship. After 18 years, Gulf decided to move the distributorship to Greenville and was looking for someone to take over the location. Already in the oil business, Moore was up to the challenge and Preston Moore Oil Company began.

In 1968, Ray Patterson joined the company as a short truck driver, delivering oil to homes and businesses. In 1973, he was joined by nephew Mickey Patterson, who soon began driving a fuel truck as well.

“Ray and I were the gophers, and Mr. Moore the architect,” Mickey recalled. “Outside there was an old gas pump, the kind where you pump the lever from side to side, and it would hold 10 gallons in a glass globe on top. A few days earlier, a fellow had offered $300 for the pump, and they’re incredibly valuable now. At any rate, one day Ray and I were working on the roof and all of the sudden I heard glass break and there was Ray’s hammer laying on the top of the broken tank. Ray had a great relationship with Mr. Moore and was very much his right-hand man, so I was glad it was him that did it and not me! We had to tape it back up with duct tape, and it’s there to this day.”

With Mickey’s addition to the company, Ray increasingly took on tasks in the office.

“Preston Moore decided he wanted to back off some,” shared daughter Janet Patterson Sides. “Mr. Moore decided to give my father more responsibilities, as well as the opportunity to buy into the business.”

In 1976, they incorporated into Preston Moore Oil Co Incorporated, and in 1977 Ray Patterson purchased the company.

“In 1989, my father had a stroke,” recalled Janet. “Until then he had been running the company on his own. I was pregnant at the time with my oldest son, Raymond.  But when my dad got through with rehab, we knew he needed help.”

Janet had just taken a job with a local supply company in Bennettsville, and after her shift she had gone to pick baby Raymond up from her grandparents, who were babysitting him.

“My father tracked me down,” Janet shared. “He showed up and said, ‘You have to quit that job and come work for me.’ I came into the business in 1989 and took over the bookkeeping.”

Around this time, Mickey left the company to pursue a career in insurance – later returning to Preston Moore and staying until his retirement in 2020 – and Ray was once again in need. This time, he set his sights on Janet’s husband, Rusty Sides.

“At the time, my husband was in school hoping to get a job with Willamette Industries paper mill,” Janet shared. “The day Rusty was given an envelope offering him a job, my father found him and asked him to come and help him with Preston Moore Oil. While the job with Willamette was very tempting for a young, growing family, we knew that my dad needed help. He had put his life into this business, so Rusty decided to help him.”

In 2009, the Sides’ son, Raymond went to college and got a degree in sports management, after which he landed his dream job, a marketing role at Darlington Raceway. Ray Patterson passed away in 2013, and the following year Raymond felt moved to join the family, where he served as VP of Operations. Now, he is VP of Fuel Sales with MPD Energy, thereby continuing his grandfather’s legacy.

“I wasn’t forced into the situation. I came voluntarily,” chimed in grandson Raymond Sides with a chuckle.

“My daddy came a long way from driving a truck to eventually owning the company,” noted Janet. “He was quite a character. I remember I had a tendency to come into work a little late, so he had a tendency to get in before me and then look pointedly at the clock so I knew I was late. He was someone that said what he felt and meant what he said.”

“He did a lot of things that people didn’t know about as far as being generous and giving to the community. He also loved Christmas parades,” she added with a laugh. “He would always decorate the short trucks and put tinsel and wreaths and all kinds of gaudy decorations on them to be displayed in the Bennettsville Christmas parades.”

While it’s not yet known whether MPD Energy will continue the Christmas parade tradition, the three Sides, along with the bulk plant staff of Alexander Odom, Debbie Watson, Ryan Rummage and Tim Lampley have stayed on and will help the existing MDT team grow this new venture together.

While not an acquisition, Gibson Oil & Gas Company, known to its customers as Gibson Oil, will be partnering with MPD Energy to focus on residential and commercial propane sales in the areas served by MEC and PDEC.

Gibson Oil owners Walter Jones and Laura Gibson Jones first met at Liberty University in Virginia. They started dating in 2004 while he was in law school in Georgia, and she was starting her nursing career in her hometown of Laurel Hill, NC. They married in 2006, moved to Atlanta in 2010, and in many ways, the rest is history.

To understand that history, however, one has to go back over 70 years as well as several generations.

In the early 1950s, Laura’s grandparents, Marshall, and Louise Gibson, built a small community store in downtown Laurel Hill. Marshall and Louise had married in 1949.  Marshall was fresh out of the Navy where he served as an airplane mechanic.  Louise moved to Laurel Hill with $2.00 in her pocket.  Louise, along with Laura’s great-grandfather, Manley, ran the little 300- square-foot, dirt floored store, which sold everyday groceries and home goods while Marshall performed car maintenance and repairs. Over the years, this simple store and service station endured.

Louise and Marshall had a son, Ronnie, who grew up and went off to college. In the spring of 1974, six months before Ronnie graduated from college, Marshall was diagnosed with lung cancer, so Ronnie came home to help his mom with the business. Ronnie drove the delivery truck while Louise ran the operations. Marshall passed away later that year.

By the 1980s, Louise and Ronnie made the decision to go into the propane business.  Louise faced her own battle with cancer during the late 1980s and when she passed away, Ronnie took over business. Life and Gibson Oil continued, and the company grew.  Eventually Ronnie’s middle daughter, Laura, married and moved south to Georgia.

But in 2015, she received a phone call that changed everything.

“It was a Saturday morning,” recalled Walt. “We got a call from Laura’s dad, Ronnie. He said, ‘It is time for me to retire and we’re considering our next steps.’ We had talked to Ronnie at some point in the past about how we could help with the business, but that’s as far as it had gone.”

For the next week, they prayed about how they might be used to serve Laura’s family.

“While I don’t actually remember this, Laura tells the story that she came downstairs early one morning, and I was looking in the fridge and said to her, ‘The Lord is calling us to North Carolina.’ We had a great life in Georgia. I had a job I loved at an area law firm, we lived in a wonderful home in an amazing community just outside of Atlanta, and we were very happy there.”

The couple felt pulled to Laura’s hometown and to help in the family business.  However, there were many details that would have to fall into place before a move would be possible.

“In 2017, some neighbor friends of ours sold their house, but soon found they needed to stay in the area for medical reasons,” Walt continued. “They asked if they could rent our home. However, my career with a law firm that I loved wasn’t something I could sacrifice. I went to the firm and explained that we would like to go and serve our family if we could. They said, “Absolutely. How can we help?’”

“I’ve been working with them remotely ever since. I was doing remote work before remote work was cool,” he added with a chuckle.

Once settled in Laurel Hill, Walt not only worked with Ronnie in leading the business but went out with the field crews as well. He drove the service trucks, met with customers, and even spent time digging trenches.

While he never had the chance to meet his wife’s grandparents and the founders of the company he now leads, some of his customers knew them personally and still share the stories.

“Laura’s grandmother – she passed away when Laura was eight – they were very close,” Walt noted. “People say, ‘If you know Laura, then you know Louise.’”

Walt considers Gibson Oil to be a fourth-generation enterprise, starting with Laura’s great-grandfather, who helped to run the original general store.

“Propane is unique because there is so much personal contact with our customers. Our drivers and service team members are at our customers’ homes and businesses many times throughout a given year and our customer service team has so much contact whether in the office or by phone. It’s a very personal business and our deepest desire is to leverage the business and the connection with people it offers to eternally impact peoples’ lives”

“At Gibson Oil our motto is ‘GO Serve’ based on our Christian beliefs.  Our core values are Safety, Service, and Purpose.  Our passion and mission is to make an eternal impact in the lives of our customers and in the communities we serve.  It is those core values and that passion and mission that overlays everything we do at Gibson Oil and how we do it.We are excited to see how we can be used in the lives of new customers in new areas of South Carolina through this incredible partnership with MPD.”

With a strong track record of investing in local communities, Marlboro Development Team, MPD Energy and partner Gibson Oil and Gas Company are committed to servicing area customers, creating employment opportunities, and developing reciprocal, rewarding partnerships with their customers and clients.  If you are in need of a new fuel or propane supplier, please reach out directly to MPD Energy, (843) 479-2211 or Gibson Oil & Gas (910) 462-2155 or directly to any of our office locations.  For more information on Gibson Oil and their purpose, passion, and calling, please visit their website at www.gibsonoilandgas.com.